Over the last few weeks, three times I've been amazed by the subtle influence of social networking.

I went to the PDX Bridgefest lighting on Sunday. It turned out to be a non-event - the lighting was overpowered by the streetlights on the bridge. Many people had turned out and were hanging out along the bridge railing. I met @maxticket and@trisimon there who thought they'd do a light show of their own. I took this photo:

I tweeted the photo here:

After the bridge "event", the three of us headed to cartopia for some fried pie. We arrived about 30 minutes later. At the counter was @piesiren who had been working that day. I mentioned the bridge lighting and the photo. She said she already knew about it because she saw my tweet and my photo on her phone. The documentation of my experience is recreating that experience in the minds of people who saw it on my twitter stream. I turned to sit down and wait for the pies to come. Sitting at the next table with three others was @joelgibby, whom i know and usually see at beer-n-blog. After a short chat it turned out that he, too, knew of our trip to the bridge and saw the photo.

I follow a few celebrities on twitter, including @alyankovic, who tweeted a funny photo about being at the Alamo. Peewee Herman's film PeeWee's Big Adventure (1985) has a subplot of reaching the basement of the Alamo. I think its likely that these two stars lead separate lives but twitter created an intersection for them. A 25 year old reference to a plot line made for a hilarious tweet. 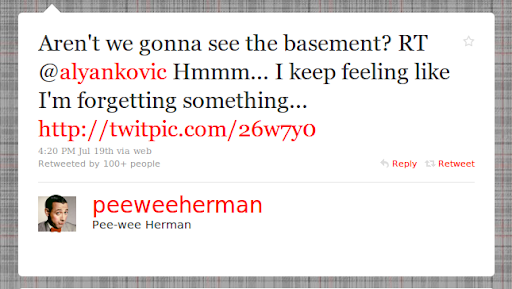 Another example is a third person connecting two famous people in an unexpected way. Leonard Nimoy @therealnimoy ends all tweets with an abbreviation of Spock's catch-phrase "Live Long and Prosper" (LLAP). This apparently became popular enough to print T-Shirts with just the acronym, and he tweeted it here. 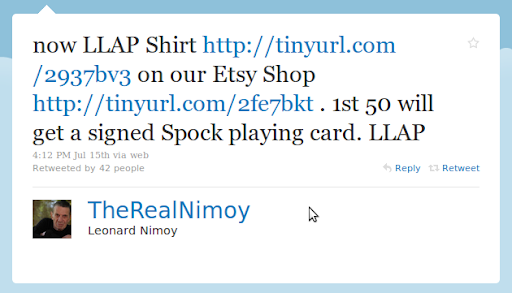 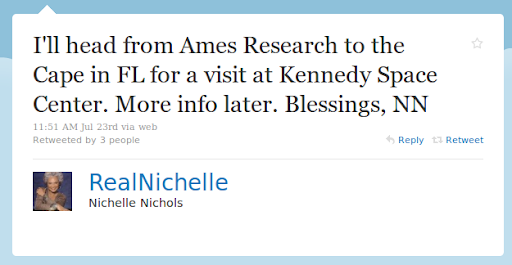 A fan was at Nichol's talk and wore the LLAP shirt. 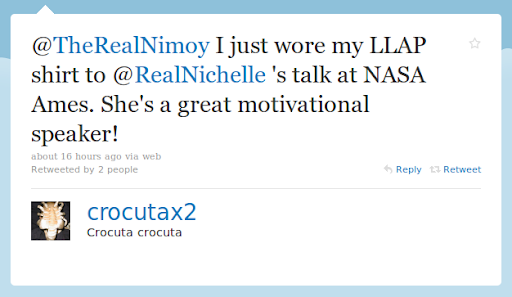 I see this correlation interesting. The reach of a tweet can be vast though its impact is impossible to measure as each person takes it differently. This simple choice of t-shirts connected the two former co-stars in a subtle but real-world way.